Have you ever wondered how putting silage with a pH of between 3.9 and 4 and loaded with lactic acid is consistent with maintain an ideal rumen pH of 6.3 to 5.8?

The rumen is an amazing environment which contains everything the animal swallows plus a liquid water-based soup of billions of rumen microbes and fungi which feed on the food that enters the rumen.
They effectively live and reproduce by using the nutrients that they can release from the various different degradable foods ingested.
They need sugars, starches, protein (nitrogen) and minerals in order to thrive.
Most of these rumen microbes are anaerobic and rely on aerobic microbes and yeasts to use any oxygen in the rumen because oxygen kills anaerobic bacteria. There isn’t much oxygen in the rumen, by volume its only about 0.6% but it still needs to be eliminated.
At a neutral pH, between 6,7 and 6.2 there is an optimum level of activity with fibre and degradable protein being efficiently digested. As this happens the rumen microbes start to produce organic acids acetates, butyrates and propionates (VFA’s), all of which support production of milk and growth.
As the acid level increases towards a rumen pH of about 5.7 Lactic acid producing bugs start to get involved when this happens the celluolytic and amylolytic microbes start to go dormant or die off because they can’t tolerate the increasing acid load
This is a big problem because lactic acid is ten times more acidic than the other VFA’s that it dominates. 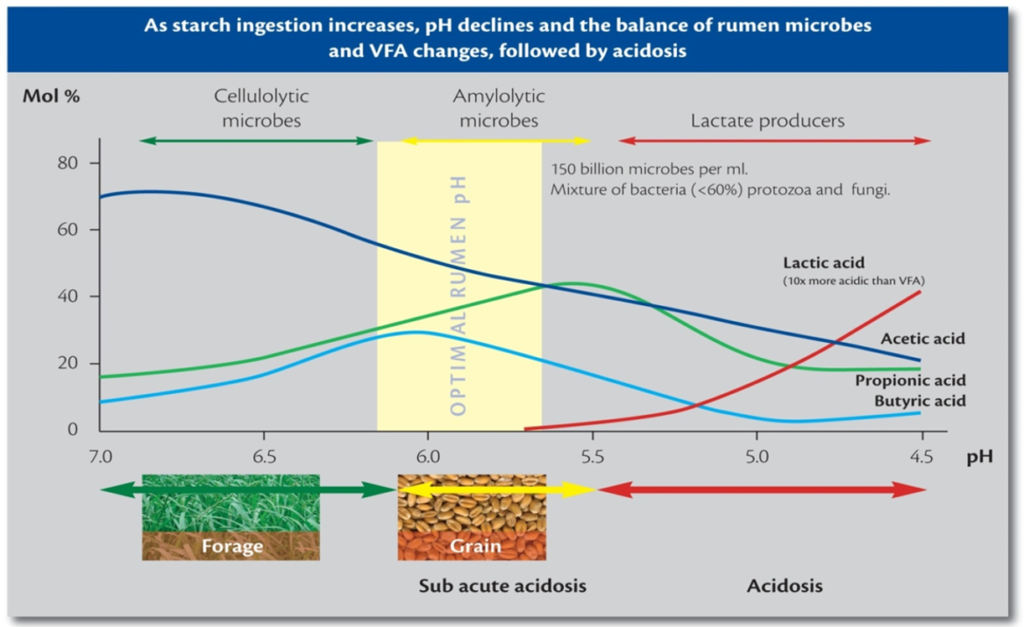 When we start to feed cows with acidic silage it is mainly lactic acid which has been produced to preserve the silage, so this will add to the lactic acid that is already being produced by the lactic acid producing rumen microbes.

All of this promotes Acidosis which if left to spiral into even more acid loading will become clinical.

Acidosis occurs when the pH of the rumen falls to 5.5 or lower.
The fall in pH has two effects.

The main cause of acidosis is feeding a high level of rapidly digestible carbohydrate, such as cereals like barley or wheat especially when they are finely processed.
Acute acidosis, often resulting in death, is most commonly seen in ‘barley beef’ animals where cattle have gorged on too much cereal feed and not enough fibre.
In dairy cattle, a milder form, sub-acute acidosis, is seen as a result of feeding increased concentrates compared to forage. Sorting can also lead to some cows becoming acidotic.

Acute acidosis often results in death, usually symptoms show before death Typically those for sub-acute acidosis and liver abscesses may also develop. Cattle may become depressed, go off feed, have an elevated heart rate or diarrhoea.

Subacute ruminal acidosis is often not detected but the inclusion of dietary buffers and structural fibre to promote the cudding activity and saliva production should be built into any diet where high levels of cereals and bakery by-products are being used.

The key to prevention is good ration balancing to account for the quantity, type and presentation of the carbohydrates and the presentation of the mix balanced with the correct amount of structural and digestible fibre.
We also need good cow comfort with plenty of lying space to encourage cudding. Feed trough management plenty of trough space with a full or semi-TMR diet to encourage several feeds per day. We also need to ensure that there is plenty of clean water.
Feeding excessive quantities of concentrate and insufficient forage results in a fibre-deficient ration likely to cause sub-acute ruminal acidosis.

It is worth remembering that as a rule of thumb a forage to concentrate ratio of less than 50:50 is the start of most of the problems!
Structural 2cm to 3cm long fibre in the diet reduces the risk of subacute ruminal acidosis by promoting saliva production during cudding and by increasing rumination after feeding. If the fibre is sorted out a good technique is to mix it with molasses in the feeder wagon.
Ruminant diets should also be formulated to provide adequate buffering. This can be helped by the addition of dietary buffers such as sodium bicarbonate but complex buffers like AcidBuf (see below) are stronger and more cost effective. 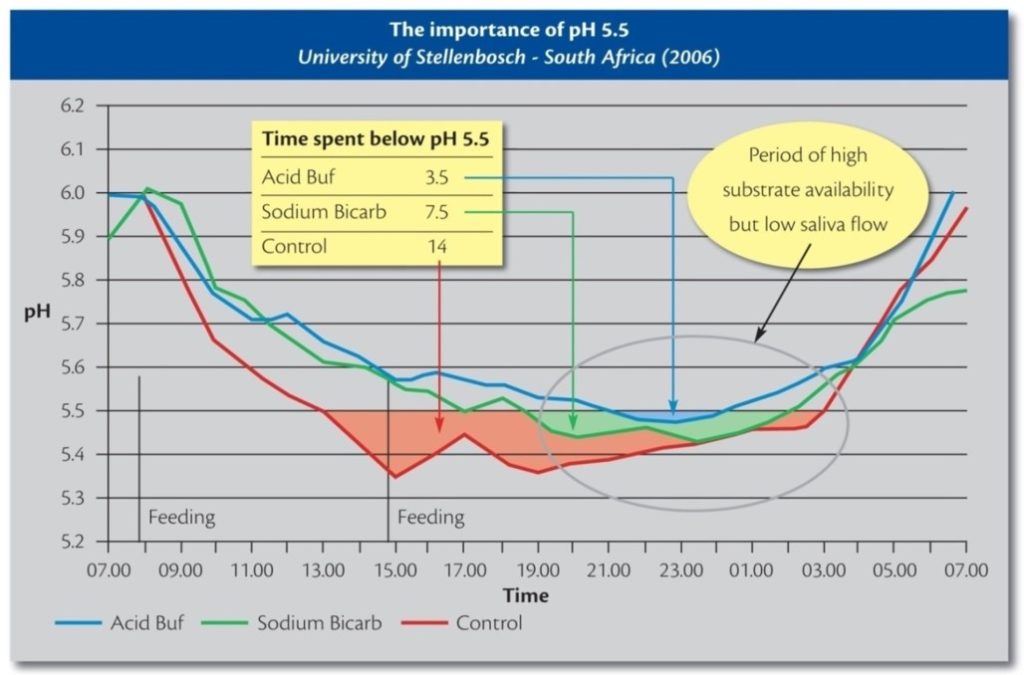 Once the control of rumen pH has been re-established from the sub-acute acidosis stage it is worth maintaining the rumen function at optimum pH in order to maintain production levels.

Silages with pH’s of less than 3.8 will need first to be buffered chemically because cudding activity alone will rarely be able to maintain a stable rumen at the optimum pH. I think live yeast cultures struggle to work well in these situations. Once the chemical buffer has been added for say 2 weeks, supplementing the diet with yeast cultures that enhance the growth of lactate utilising microbes in the rumen will reduce the risk of subacute ruminal acidosis.
F1 Yeast and Diamond V have good data supporting this function.
I think that a staged approach is best. It is worth taking steps to gradually build up the Yeast elements when introducing these products for the first time. This can be followed by a short period of say 14 days when the animal can be double dosed to re-establish a better base population of Cellulolytic and Amylolytic microbes.
When you have to feed low pH silages:

Remember that adding a good rumen buffer to cereal beef finishing diets can be a very productive exercise. The kinder rumen environment helps to optimise propionate production which is an essential step in the synthesis of tissue growth in beef cattle. 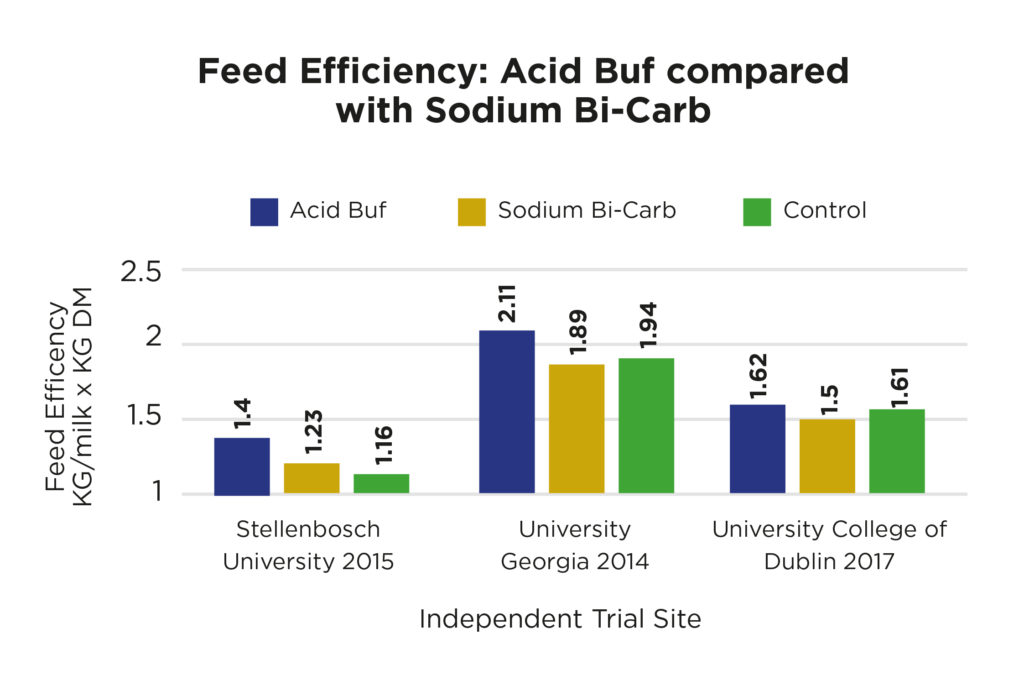 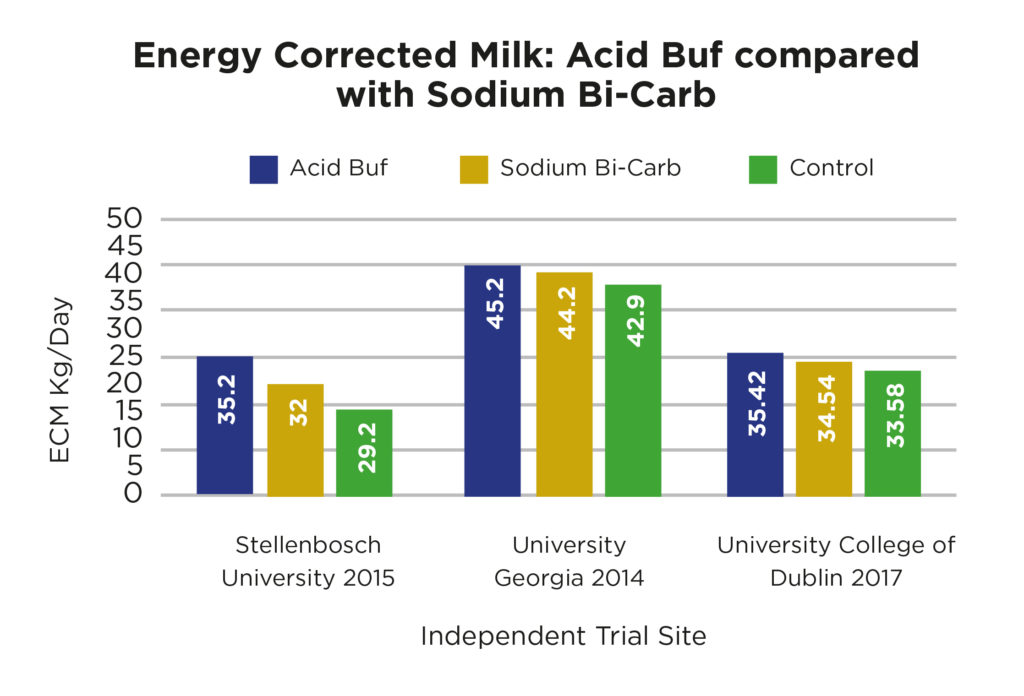